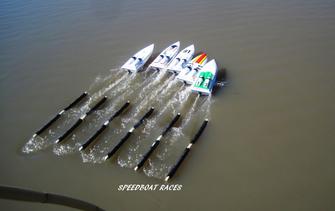 Spectators welcome at all races.

The MLYC has been racing radio controlled model sailboats on our own Mirror Lake at Travelers Rest for over 25 years. In 2012, electric powerboats were introduced as another division and have proved to be as popular as the sailboats with each division having a membership of about 20 skippers.

Presently we are using the Soling One Meter Class sailboats which are available in kits. This boat provides a low-cost one-design model suitable for introducing newcomers to the hobby, while offering enough performance to keep long-term model sailors interested. Powerboats are ready-to-race models called the Power-Vee and provide plenty of speed for exciting powerboat racing.

Sailboats race every Wednesday and Saturday morning around buoys that mark the course. Powerboats race on Monday and Friday. Scores are kept for every race, culminating with a season champion being crowned at the annual yacht club banquet. Winners receive certificates, ribbons and their names engraved on trophies at Travelers Rest, Busch Hall.

When Mirror Lake was first built there were frustrated sailors who sailed board boats, sailing canoes, model cruisers and sailboats on the lake. In the 1983-1984 season, Stuart Orton built the first thirty-inch model Star Class boat that was free-sailing and named T.R. Lady; once launched, she could not be controlled from shore. There was considerable interest and after clearing with management, an organizational meeting was held that formed the Mirror Lake Yacht Club.

Kits were ordered with radio controls and building was completed over the summer. Ten boats were in competition during the 1984-1985 season. Stuart Orton was the Commodore for the first few years. Stan Barnes succeeded Orton and was Commodore until 2001. Yes, a Ladies Day annual event was started in 1994 and was held for a few years. In 1999 Stan introduced the Soling One Meter Class to the club and by 2005 it had become the standard for competing.

In 2012, Lynn Meyers and Gary Steeves developed an interest in racing powerboats and was supported by others. They placed an initial order of 18 boats and the division has proved to be very popular since day one.

In 1988 the club added a memorial flag pole and plaque to the Memorial Park at Mirror Lake to honor its members who have died. A new dock was installed in 2007 and in 2008, a lighthouse was built by member, Sam Scime.

The members help out every season to enhance their facilities and tweak the rules to keep all racing low cost, fair and competitive - but, most of all - Fun ! 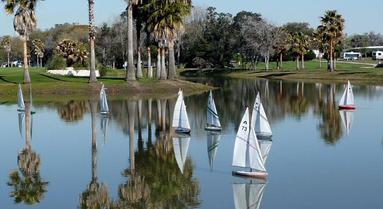